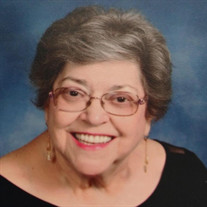 Adeline "Addie" was 83 yrs. old when she passed away Saturday, July 17, 2021 in Lehigh Valley Hospital, Allentown, PA. She born in Mahanoy City, Schuylkill Co. to the late Albert and Susan (Buzzelli) Silveri. A 1956 graduate of Mahanoy City High School, she had a strong interest in musical theater, eventually performing with various community theaters and serving as president of Pottsville Community Players. Following marriage and a move to the Lehigh Valley in 1974, Adeline Hassel became involved in the area’s growing theater community, performing featured roles, in choruses, and behind-the-scenes duties. Over the years she worked with Applause Dinner Theater , Civic Little Theatre, Larry Roth Productions and Pennsylvania Playhouse. She served on the board of directors of Pa. Playhouse, and was a co-founder of the TheatrEast production company. A turning point in community theater occurred in 1977 when, after a popular TheatrEast run of “Jesus Christ, Superstar,” at Northampton Community College, she helped bring it to an audience of 6,000 at the Allentown Fairgrounds. After producing the commemorative program book for that show, she began to develop ideas for a Lehigh Valley publication similar to Broadway’s famous Playbill magazine. That same year, Admar Associates/Theatrical Faces was incorporated and began publishing Adeline’s first theater magazine, named after her theater make-up business. Later it added publication of another arts magazine, Gallery Arts. As the arts community grew, so did the magazines and in 1986 the publications combined and became Arts Alive!, a magazine dedicated to the arts that also served as a performance program tailored to each theater’s current production. Arts Alive! was published monthly until 1999 when Admar magazines ceased publication. At one point, they had reached 180,000 annual distribution reaching as many as 17,000 readers a month. It was available free at collegiate and community theaters and art galleries throughout the Lehigh Valley. On May 9, 1996, Arts Alive! received the Allentown Arts Commission’s Arts Ovation Award for “outstanding service to the arts…as the only arts-related magazine-playbill dedicated to delivering quality reading to their audience…” Adeline served on the Arts Commission’s budget committee for 15 years, and for two years as board president. She was on the founding board of the Mayfair Festival of the Arts and for 47 years, she sang in the Cathedral Choir of St. Catharine of Siena Catholic Church where she was a lifetime member. She was a longtime supporter of Stonehedge Gardens Holistic Learning Center of Tamaqua and for many years worked at JCPenney in Allentown as a sales specialist. Adeline is survived by her beloved daughter Holly Hassel-Smorgala and husband Larry of Key Colony Beach FL and by a brother, Albert Silveri Jr. and his wife Marianne of Wyomissing. She is also survived by a cousin, Francis Del Plato and her husband Mario of New York City and by 23 nieces and nephews and two grand-nieces and nephews. She was predeceased by her sisters Lydia Trusky and Theresa Fadule. Donations: Civic Little Theater,527 N 19th St., Allentown, PA 18104 or Cathedral Choir c/o Cathedral Church, 1825 W Turner St., Allentown PA 18104. Burial will be at a later date.

The family of Adeline "Addie" Burt created this Life Tributes page to make it easy to share your memories.

Adeline &quot;Addie&quot; was 83 yrs. old when she passed away Saturday,...

Send flowers to the Burt family.