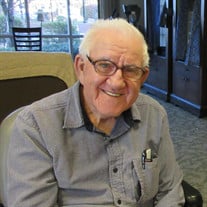 Calvin A Makos, 88, of Allentown, died August 24, 2018 in Phoebe Assisted Living in Allentown, PA. He was the son of the late Charles and Mary (Gescek) Makos. Calvin was married to Lorraine F Zeiner. He grew up on a farm with 15 siblings and went to a one- room schoolhouse. He served during the Korean War in the Marine Corps from 1951 to 1953. He was an expert marksman and a rifle instructor for two years at the Marine Recruiting Center on Parris Island, SC. He was a miner and then flotation operator at the NJ Zinc Company in Friedensville, PA for 24 years. He then went on to become a mechanic at the Shepherd Hills Golf Course in Wescoesville, PA. Calvin was an avid cyclist and enjoyed riding on the boardwalk in Atlantic City and Ocean City, NJ. Having grown up on a farm, he also enjoyed gardening. His gardening efforts at Phoebe Home included growing flowers and vegetables in the front courtyard, which was greatly appreciated by the Phoebe community. After opening a service station with his brother, Stephen, he learned to repair cars and he enjoyed working on them throughout his life. He was very mechanically inclined. He built and contracted three family homes in which his family lived. Survivors: his wife: Lorraine F (Zeiner) Makos, one daughter: Diane wife of Robert Batemarco and their children, daughter Linda and son Thomas of Peekskill, NY and one son: Glenn Makos husband of Shara Bailey and their daughter, Amelie Makos of Maplewood, NJ. Two sisters: Jenny Messics of Palmerton, PA and Miriam Noll of Florida. Predeceased by his brothers: Joseph, Charles, Ernest, William, Frank, Stephen and John and sisters, Helen, Margaret, Ethel, Gloria, Agnes and Anne. Contributions can be made in memory of Calvin Makos to: Phoebe Home, 1925 W Turner St., Allentown, PA 18104. Private service.

Calvin A Makos, 88, of Allentown, died August 24, 2018 in Phoebe Assisted Living in Allentown, PA. He was the son of the late Charles and Mary (Gescek) Makos. Calvin was married to Lorraine F Zeiner. He grew up on a farm with 15 siblings and... View Obituary & Service Information

The family of Calvin A Makos created this Life Tributes page to make it easy to share your memories.

Send flowers to the Makos family.