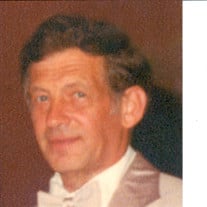 Dominic M. Morenci (Chuck), 91, of Allentown, PA, went home to the Lord on May 1, 2018 at Phoebe Devitt Home after a long battle with Congestive Heart Failure. He was the loving husband of the late Regina R. Morenci, who died on March 3, 2017. They celebrated their 65th wedding anniversary on October 13, 2016. Dominic was born in Tresckow, PA on March 8, 1927. He was the son of the late John & Scholastica (Moretti) Mariorenzi. Dominic graduated from Tresckow Elementary School and Hazleton High School. He served in the Navy as a Seaman 1st class, stationed at USNTC Sampson NY, aboard the USS Macon, a heavy-duty cruiser in World War II. After his discharge, he gained the knowledge and abilities to further his education through the G.I. Bill of Rights. Dominic was a Master Craftsman, proficient in many fields: Stone Mason, Bricklayer, Electrician, Carpenter, Upholsterer and Remodeler. He built and remodeled numerous structures and continued in these enterprises until his death; nothing appeared too difficult for him to accomplish; even though in many instances he was self-taught. Dominic owned several businesses in the Lehigh Valley: Morenci-Reese Furniture Co. in Allentown and Emmaus, John M. Spiegel & Sons Frame Mfg. Co., Eichler Wood Products (which was a subsidiary of John M. Spiegel & Sons) and Conrad Furniture Company. He also made furniture for Bloomingdale’s in New York City for many years. He retired in 1994 but continued to do upholstery work part time. Dominic was an avid Sportsman who enjoyed hunting and exploring the outdoors. He was a member of the American Legion, Fullerton, Post#367, St. John’s Club, Front St., Allentown, The Fullerton Fire Company, Fullerton and Unami Fish and Game Association, Emmaus. Dominic was a longtime member of St. Catharine of Siena Church, where he plowed the parking lots for many years with his Jeep. A loving husband and father, he will be dearly missed and fondly remembered by his four children: Patricia R. (wife of John P. Hoch), Debra A. (wife of Bryan M. Gault), Donnamarie C. (wife of Michael A. Yeager), Robert R. (husband of Carol Androsky), all of Allentown, PA. Four grandchildren: Crystal Gault, Caitlin Gault-Nunes (wife of Jeffrey Nunes), Desiree’ Yeager and Carissa Morenci. Sisters: Jennie Stola of Tresckow, PA and Carmella (wife of Joseph Gendemenico), of Baltimore, MD. Dominic was predeceased by sisters: Angeline Mariorenzi and Magdalene Caprarelli, brother, Joseph Mariorenzi . Services: A Mass of Christian Burial will be held on Tuesday, May 15 11:00 AM at St. Catharine of Siena Church, 18th & Turner Streets, Allentown, PA. Viewing hours will be held 9:30-10:45 AM at Robert C. Weir Funeral Home, 1802 Turner Street, Allentown, 18104. Interment: Greenwood Cemetery. Contributions: Holy Masses would be appreciated or contributions to the St. Luke’s Visiting Nurses Association or St. Luke’s Hospice, St. Luke’s University Health Network Development Office, 801 Ostrum Street, Bethlehem, PA 18015.

Dominic M. Morenci (Chuck), 91, of Allentown, PA, went home to the Lord on May 1, 2018 at Phoebe Devitt Home after a long battle with Congestive Heart Failure. He was the loving husband of the late Regina R. Morenci, who died on March 3, 2017.... View Obituary & Service Information

The family of Dominic M Morenci created this Life Tributes page to make it easy to share your memories.

Send flowers to the Morenci family.