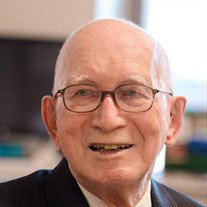 Frank Edward Pavlis, 101 yrs.died August 24, 2018 at Legacy Place Cottages. He was born October 29, 1916 on a wooded farm in Grand Traverse County, Michigan. His father was born in Chicago, Illinois and his mother on a wheat farm in northern Minnesota. In 1947, Frank married Ethel Piehl who died in 2002 after a long illness. The couple had no children. He earned a B.S. degree in chemical engineering in 1938 at Michigan Technological University, a M.S. degree in 1939 at the University of Michigan and completed the Advanced Management Program in 1957 at the Harvard Business School. In 2014 the Michigan Technological University awarded Pavlis with an honorary Doctor of Philosophy degree for his accomplishments. In the spring of 1939 Pavlis was employed by Leonard P. Pool, a young Detroit executive, to design and construct a prototype process plant to separate 99.5% pure oxygen from atmospheric air. When the challenging project was successfully completed a year later, the young entrepreneurs decided to found a new company to manufacture and to sell or lease air separation plants to large users of oxygen and nitrogen gases. On October 1, 1940, a new company named Air Products, Incorporated, was founded in Detroit, Michigan. Pavlis was the first employee, the Chief Engineer. The new company made an important contribution to the success of World War II. In 1943, it moved its operations to Chattanooga, Tennessee, in 1946 to Emmaus, PA, and in 1957 to Trexlertown, PA, a suburb of Allentown, PA. Currently, the company called Air Products and Chemicals, Inc. has annual revenues of approximately ten billion dollars and operations in fifty countries. Pavlis retired from Air Products in 1980 after forty years of service. He had various positions including Chief Engineer, Treasurer, Vice President Engineering, Vice President Finance and Vice President International/World Trade. He also served on the Board of Directors for 28 years. He traveled around the world five times during his lifetime. Pavlis was a member of the Allentown Central congregation of Jehovah's Witnesses. He will be buried in the small Michigan cemetery where his wife, parents, grandparents, brother and sister are buried. The Memorial talk will be on Sept 10, Monday at 4 pm at the Kingdom Hall of Jehovah’s Witnesses, 4571 Indian Creek Rd., Macungie PA 18062-9766 Contributions to Jah Jireh Homes of America-Allentown, 2051 Bevin Dr, Allentown, PA 18103. They will be used to fund charitable care at Legacy Place Cottages. The Robert C. Weir Funeral Home is charge of arrangements. www.WeirFuneral.com

Frank Edward Pavlis, 101 yrs.died August 24, 2018 at Legacy Place Cottages. He was born October 29, 1916 on a wooded farm in Grand Traverse County, Michigan. His father was born in Chicago, Illinois and his mother on a wheat farm in northern... View Obituary & Service Information

The family of Frank E Pavlis created this Life Tributes page to make it easy to share your memories.

Send flowers to the Pavlis family.