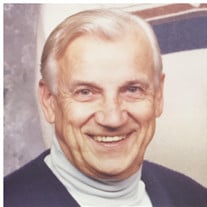 Gerald F “Gerry” Brestovansky, 95, of Allentown, died Nov. 8, 2017 in Whitehall Manor. He is predeceased by wife of 64 years, Anna (Bereziak), brother Milan and sister Mary. He is survived by son Dennis, husband of Liz Brestovansky, of Newtown, Connecticut and daughter Gail Wetherhold, of Macungie, Pennsylvania, grandchildren Meghann (Samuel) Buck, Emily (Christopher) Marks, Lindsay, and David Brestovansky, Ashley, Eric, Alex, Ian and Annae Wetherhold, great granddaughter Norah Buck and nieces and nephews. He was born in Palmerton, PA and went to Palmerton High where he played baseball and on championship basketball teams. He graduated in 1939 after which he worked his way through Stevens Tech in Hoboken, NJ receiving a degree in mechanical engineering. While at Stevens Tech, he played varsity soccer, lacrosse and was captain of the basketball team. Gerry was inducted into the school’s Athletics Hall of Fame in June of 2005. During his senior year at Stevens, he enlisted in the Navy U-12 program of the US Naval Reserve. Upon graduation in 1944, he went on to midshipman school in New York City and was commissioned an Ensign. He was then ordered to Harvard pre-radar and MIT radar schools after which he was assigned as the Radio, Radar and Sonar officer for destroyer escort ships in the South Pacific during WWII. He later became an operations officer near Guam. When the war ended he was promoted to Lieutenant and was assigned to escort training in New London, CT. He resigned from the Naval Reserve in 1946. Later in 1946, he was hired by founder Leonard Pool to work at Air Products. During his 40 year career with the company, he served in design, service and sales departments before moving to project engineering and the process equipment division. His job involved travel throughout the US and Japan. The job also took Gerry and his young family to London for 3 years and his daughter, Gail, was born in Wimbledon. He retired from Air Products in 1986. Gerry was proud of and loved living in Allentown. He often remarked that the city had everything you could want. He remained an avid golfer and played tennis with his wife, Anna, well into their later years. He is loved and will be missed by family and friends, whom he always looked out for and helped in any way he could.

The family of Gerald F Brestovansky created this Life Tributes page to make it easy to share your memories.

Send flowers to the Brestovansky family.