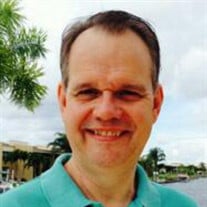 James J. “Jim” Mackenzie passed away peacefully among family on September 21. Jim fought a brief but valiant fight against the cancer that claimed his life. Born to William and Jane Mackenzie on June 24, 1961, Jim graduated from Allentown Central Catholic High School, then joined the Navy in June of 1979. Jim proudly served his country for six years as an electronics technician. His service included deployments aboard the nuclear submarine USS Lewis and Clark. Jim’s Navy training and electronic skills served him well in his life’s work. He traveled extensively designing, installing, repairing, and providing user training for the electrical/ electronic control centers which are essential to the operation of nuclear and conventional power plants. Jim’s work took him to Israel, China, Saudi Arabia and many US locations. A naturally curious man, Jim enjoyed the challenge of electronic trouble shooting and problem solving – he was everyone’s “go-to- guy” for home and personal electronic devices. Big, outgoing and cheerful, Jim lived the old adage of seeing strangers as friends he had yet to meet. He had a fine tenor voice; he sang in several choirs in his lifetime; and he thoroughly enjoyed Karaoke. More recently he took up traveling on cruises. Jim generally undertook any activity which allowed him to share himself and his enthusiasm for life with others! Jim leaves behind two children, Rachel (Whitehall) and Thomas (Allentown); two brothers, Jack (Chesapeake, VA) and William (Allentown); two sisters, Mary Falk (Old Lyme, CT) and Katie (Alexandria, VA). A memorial service will be held at the Weir Funeral Home (Allentown) at 3PM on October 22. The family requests in lieu of flowers memorial contributions be considered to Center for Hospice Care Southeast Connecticut  (227 Dunham St, Norwich CT 06360) or to New England YMCA Alumni (38 Center Beach Ave, Old Lyme CT 06371) to fund the annual Christmas Eve Dinner for the humble residents of the barrio of Don Gregorio in the Dominican Republic which Jim has very generously supported for many years.

James J. &#8220;Jim&#8221; Mackenzie passed away peacefully among family on September 21. Jim fought a brief but valiant fight against the cancer that claimed his life. Born to William and Jane Mackenzie on June 24, 1961, Jim graduated from... View Obituary & Service Information

The family of James J. Mackenzie created this Life Tributes page to make it easy to share your memories.

Send flowers to the Mackenzie family.