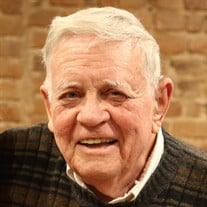 James G. Watt, Esquire, 83, died Tuesday, September 12th 2017 in Lehigh Valley Hospital Cedar Crest, Salisbury Township, PA. He was the husband of Beatrix/Bibi (Buis) Watt. They were married 53 years. Born in Pittsburgh, PA, he was the son of the late Charles and Elizabeth (Eidemiller) Watt. Jim was raised in Greensburg, PA. A member of the Mercersburg Academy class of 1952, he graduated from Yale University in 1956. Before attending Temple Law School at night, he served as an officer in the US Navy on a Naval base in Turkey and aboard the aircraft carrier USS Essex. He received his law degree in 1965 and was admitted to the Lehigh County Bar in 1966. In 1975 he became a sole practitioner of law eventually specializing in individual and small business bankruptcies appearing on behalf of debtors before the US Bankruptcy Court in the Eastern and the Middle Districts of Pennsylvania. He had previously been employed by General Acceptance Corporation and Butz, Hudders and Tallman. At various times between 1975-1986 he served as an Assistant Solicitor for Lehigh County, as Administrator of the Magisterial District Justices and as a Trustee of the U.S. Bankruptcy Court. He was a lifelong avid reader and keenly interested in politics and news both national and international. In retirement he continued reading and began writing novels and volunteering with Daybreak(Lehigh Conference of Churches) and the Catholic Charities Ecumenical Soup Kitchen. Earlier he volunteered with the American Foundation for the Blind (Radprin). He enjoyed sailing on the Chesapeake Bay and Intra Coastal Waterway, riding his bicycle around town and baking bread. Jim was a member of the Cathedral of St. Catherine of Siena. Survivors: Wife; son Gill and wife Kathie Watt of Acton, MA; daughters Jennifer and husband Jeff Kramer of Anderson, SC; Sarah and husband Scott Campbell of Centennial, CO; and Katherine Watt and husband Joshua Lambert of State College, PA; and 10 grandchildren. Also niece, E Nicole Hill and nephew, Milo P Gerber III. He was preceded in death by his sister, Joan. Interment will take place in PA. Contributions: please consider a contribution to the Allentown Public Library, 1210 Hamilton St., Allentown, PA 18102. www.WeirFuneral.com

The family of James G Watt created this Life Tributes page to make it easy to share your memories.

Send flowers to the Watt family.