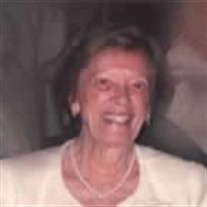 Jean Doern Lieberman died peacefully in her home in Allentown on January 10, 2017. Jean was 91 years old. She just hosted four generations of her family of 35 for Christmas at her home on 12/30. Jean treasured her life, her family, her faith, her country and her adventures. She believed she was profoundly blessed. Jean was born on June 2, 1925, the eldest child of Helen Maple Doern and J. Oliver Doern in Palm Beach, FL. She was graduated from Wellesley College in 1947 and started a brief but colorful career as a radio broadcaster and, later, as Miss Jean on the syndicated television show, Romper Room. In 1981 she received her Master of Art's Degree in English Literature from Lehigh University. The focus of her life was her four children, their spouses, her grandchildren and more recently, her great grandchildren. Quoted in a Sports Illustrated article Jean said, what's important is "¿.the teaching of values. I raised the children on Kipling's If, The Lords Prayer and the St. Francis Prayer." That was the metal of this woman. Jean believed in giving back to the institutions that helped her and her family. She served on the Board of Directors of the Allentown YM/YWCA, including several years as board chair, and the Wellesley Lehigh Valley Alumni Association. She also faithfully supported Wellesley College, St. Thomas More Parish, the Lehigh Valley Girl Scouts, Allentown YM/YWCA, and Blair Academy among many other organizations. Jean was a participating member of many Allentown clubs, including two book clubs and numerous other social clubs. She cherished her friends and they in turn cherished her. Jean earned her private pilot's license in 1970 when she was 55. She enjoyed golfing, tennis and skiing. She was a part of Lehigh Country Club for almost 80 years and she Co-Chaired the Ladies Golf Committee. She loved her walks along Pennsylvania's Little Lehigh Creek with any one of her loyal German Shepherds. Most of all, she was excited by nature travel where she could experience the incredible beauty of the world and it's people. She traveled to all seven continents including Antarctica. "Mum," as she was known to her family, traveled with each of her 13 grandchildren to an enlightening destination like the Australian outback, the Galapagos Islands, the Fiords of Norway, the Glaciers of Alaska and so many more. She hoped to plant the seeds of wonder about the world in each of them and she succeeded. Jean traveled with her children and their spouses on a barge trip in France, whitewater rafting in Costa Rica, on safari in Africa, sailing a catamaran in the Grenadines and exploring Russia. She was game for swimming with sea turtles, spotting polar bears, and floating with sperm whales. More recently, she enjoyed relaxing with her children on Cape Cod, in Anguilla, at Maple Springs Vineyard and in Telluride. Jean helped her husband found and build Lieberman Appalucci Advertising into a leading agency in eastern PA. She also was a shareholder and member of the Board of Directors of a family firm, Interspace Airport Advertising. Over 18 years she helped the company grow on three continents to serve over 200 airports including Allentown, West Palm Beach, Cyprus, Belize, Grand Cayman, Ottawa, and Queenstown. The business was successfully sold to the worlds largest out of home media company, Clear Channel Outdoor, in 2006. Jean was proud of all her family's accomplishments. Her children worked in the US Congress, built businesses that created hundreds of jobs, won NCAA championships and gave back to the world in so many ways. And her 13 grandchildren are just getting warmed up. She celebrated each achievement. Survivors: Jean was predeceased by her parents, her brother Jack Doern and his spouse Alice, and her sister Barbara Wilt. She is survived by her children and their families, Karen Lieberman-Daly and her spouse Ed and their children Kate and Colin and his spouse Rachel; Mike Lieberman and his spouse Molly and their children Maura and her spouse, Zach Ohl (and great grandchildren Riley and Conor), Paige, Blair and Brooke; Mark Lieberman and his spouse Debbie, and their children Maria and her spouse Aaron Smalley (and great grandchild Matthew) Tom, Nick and his spouse Christina (and great grandchildren Parker, Jake and Cole), Sarah and her spouse Jim Luchansky and Kevin; and Marianne Lieberman and her spouse Carolyn Grant and their children Meghan and Clare. These are the children and families from Jean's marriage to George Lieberman who also predeceased her. She is survived by 26 loved nieces and nephews and their spouses and 28 great nieces and nephews. Services: A Mass of Christian burial will be celebrated by Monsignor John Murphy at St. Thomas More Catholic Church, 1040 Flexer Avenue, Allentown, PA on Friday 1/13/17 at 10:30 AM. The family will be receiving friends beginning at 9 AM. Interment: Private. Contributions: In lieu of flowers, contributions can be made to the Saint Thomas More School Endowment, 1040 Flexer Avenue, Allentown, PA 18103, Allentown YM/YWCA, 425 South 15th Street, Allentown, PA 18102 or to the charity of your choice .

Jean Doern Lieberman died peacefully in her home in Allentown on January 10, 2017. Jean was 91 years old. She just hosted four generations of her family of 35 for Christmas at her home on 12/30. Jean treasured her life, her family, her faith,... View Obituary & Service Information

The family of Jean Doern Lieberman created this Life Tributes page to make it easy to share your memories.

Jean Doern Lieberman died peacefully in her home in Allentown...

Send flowers to the Lieberman family.