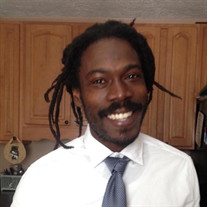 Kippy Reco Henry, 42, from South Whitehall Township, was tragically taken from this world on Tuesday, October 12, 2021. Kippy was born in the village of Bolans in Antigua. There, he spent his carefree youth in what he always described as “Paradise”. He moved to the United States as a young adult, but returned home as often as practical as he began to put down roots in Allentown, PA, and build a family of his own. He worked hard as a professional painter and saved his money to build a family home in Antigua. His dream was to have a family home in Antigua to leave to his family so that they might one day experience the love he had for his native country. The family home is nearly complete. Kippy’s faith in God was never-ending. He read his Bible daily with his family, friends, and on his own as he contemplated the meaning of life. He lived his faith in his kindness and loyalty to his family and friends, and his faithfulness to Meggie, Jahnessa, Noah, and Judah. Most of all, Kippy was a jovial man, always laughing and smiling. You rarely saw him without that large grin on his face. This is something we will miss about him the most. He also enjoyed being in nature, physical fitness, meditation, his music, and spending time with his family and friends. One of his joys in life was playing and cuddling with his dog, Piper. He was not a fan of the cold, as his island blood never did adjust to the northeastern winters. He would be wrapped up in a hoody, hat, and parka long before the first snowfall hit the sidewalk. He didn’t like anything cold, even a pumpkin or apple pie needed to be heated before he could enjoy it. He is survived by his loving wife and children: Meggie Berta, daughter, Jahnessa, 17, graduating from Parkland High School this spring; son, Noah Ambessa, 13, attending Orefield Middle School; son, Judah Usou, 12, also attending Orefield; his in-laws, Mark and Margie Adam (Meggie’s Mother), their daughters Eliza and Lily Adam; and in-laws Dan (Meggie’s Father) and Christine Berta; along with his Antiguan family, extended family, and close friends. He was predeceased by his father, Lennox Henry. Kippy will be laid to rest in Antigua. A GoFundMe account https://gofund.me/877e7c0c has been started for Meggie and the children. Kippy’s family prefers donations be made here in lieu of sending flowers or gifts. We are inviting you to a scheduled Zoom meeting: Topic: Kippy Henry Time: Oct 21, 2021 07:00 PM Eastern Time (US and Canada) Join Zoom Meeting https://us05web.zoom.us/j/84178790988?pwd=WXV2MGdQc3NleWdaTVE5d3Uwa1NwZz09 Meeting ID: 841 7879 0988 Passcode: Kippy

Kippy Reco Henry, 42, from South Whitehall Township, was tragically taken from this world on Tuesday, October 12, 2021. Kippy was born in the village of Bolans in Antigua. There, he spent his carefree youth in what he always described as “Paradise”.... View Obituary & Service Information

The family of Kippy Henry created this Life Tributes page to make it easy to share your memories.

Send flowers to the Henry family.