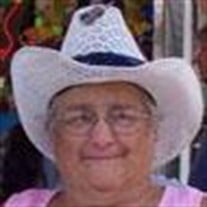 Margo Mae Ettinger, age 78, of Bethlehem died Thursday, October 20, 2016 at Lehigh Valley Hospital Muhlenberg of Bethlehem, PA. She is the daughter of the late Paul and the late Harriet (Gerhardt) Heist. Margo was married to the late Harry... View Obituary & Service Information

The family of Margo Ettinger created this Life Tributes page to make it easy to share your memories.

Send flowers to the Ettinger family.