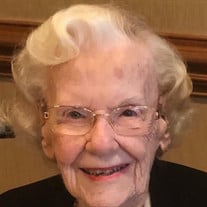 Mary McGurl McGinley, whose generous spirit and sense of humor brightened the lives of everyone who knew her, died April 19 at Luther Crest in Allentown. She was 100 years old. In September, after blowing out the candles on her birthday cake, she quipped, “Does this mean I get another 100?” Mary, or “Mimi” as she was often called, leaves behind a devoted fan club of children, grandchildren and great-grandchildren who relished her kindness, patience and playfulness. Born Sept. 8, 1919, in Minersville, Pa., Mary was the youngest child of Laura Ellin (Quinn) McGurl and John Breslin McGurl. Along with her sister, Blanche, and brother, John, she spent summers at her beloved Deer Lake. Mary graduated from high school at 16 and from Georgian Court College four years later. In 1942, she married Paul A. McGinley, of Allentown. A successful attorney, he served as District Attorney of Lehigh County from 1955 to 1959. The couple had four children. She often said her years as a 1950s homemaker were among the happiest of her life, filled with backyard parties with friends and family dinners at local restaurants. Mary liked nothing better than to order a whiskey sour and “surf and turf.” Summers often included vacations at the Jersey Shore, Florida -- and once, Bermuda -- where everyone enjoyed swimming, deep-sea fishing and watching alligator wrestling. To an extraordinary degree, Mary’s life was defined by service to others, even amid adversity. After her husband died in 1964 at the age of 48, Mary spent her life raising her children and caring for those who needed her, including her siblings and sister-in-law, Jane McGurl. She volunteered for Meals on Wheels and the Mercy School and babysat for her grandchildren -- a source of great joy. “All she knows is love,” a relative once said. At the same time, Mary became a first-rate bowler and was a whiz at crossword puzzles. She loved chocolate of any kind — especially hot fudge poured over vanilla ice cream. As her family grew over the years, Mary’s longtime home on Chew Street became a happy gathering spot for reunions and holiday dinners. She often greeted guests with a giant pot of homemade beef stew or vegetable soup. An avid sports fan, she followed professional tennis in the summer, Notre Dame football in the fall and Duke basketball in the winter. Her enthusiasm was contagious. In 2006, Mary moved to Luther Crest, where she became part of a close-knit community that included wonderful friends such as Bob Benedict and the late Charlotte Staton. She learned how to line dance, volunteered in the gift shop and went to concerts, plays and lectures. She was happiest when surrounded by her family, which includes nine grandchildren and five great-grandchildren. Survived by her four children: Ellin McGinley Daum; Paul A. McGinley (Shirley Coffey); Ann McGinley (Jeffrey Stempel) and Laurie McGinley (Eric Pianin). Her nine grandchildren are Caitlin Daum; Paige McGinley (Pannill Camp); Laura McGinley (William Lamson); Paul McGinley III (Julia West); Ryan, Reed and Shanen McGinley-Stempel and Alix and Stephen Pianin. Her five great-grandchildren are June and Willa Camp; Solé Lamson and Jack and Maxwell McGinley. Donations may be made to the Mercy School for Special Learning in Allentown. A private celebration of Mary’s life will take place at a later date.

Mary McGurl McGinley, whose generous spirit and sense of humor brightened the lives of everyone who knew her, died April 19 at Luther Crest in Allentown. She was 100 years old. In September, after blowing out the candles on her birthday cake,... View Obituary & Service Information

The family of Mary McGurl McGinley created this Life Tributes page to make it easy to share your memories.

Mary McGurl McGinley, whose generous spirit and sense of humor...

Send flowers to the McGinley family.