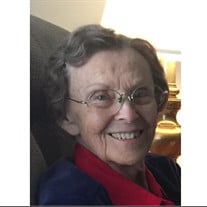 Miriam Joan (McDevitt) Drauch, 89, passed away on August 13 at home surrounded by her three children. Born in Philadelphia on May 16, 1932, she was the daughter of the late James and Margaret (Heim) McDevitt. Miriam moved to Allentown as a high school senior and graduated from Central Catholic High School. She met her late husband, Dr. Eugene W. Drauch, at the Arena Gardens Roller Skating Rink when he asked her to skate. They were married 61 years until his death in 2016. At age 40 Miriam went back to school and graduated from Northampton Community College’s RN program. As a nurse, she worked for many years in the Mother Baby Unit at Allentown Hospital. She swaddled many new babies. After she retired, Miriam enjoyed reading and gardening with her husband. Most of all, she loved God and her family. There were yearly trips to the shore with her children, grandchildren and recently great-grandchildren. For over 40 years Miriam, her sisters, and extended family met every Saturday for lunch at local restaurants. Throughout her life, Miriam was a devout Roman Catholic. Miriam will be remembered for her spirit, generosity and kindness. She was beautiful in every way. Miriam is survived by her children Jeanmarie Pla and her husband Ruben of Easton; Karen Wessner of Easton; David Drauch and Holly Heller of Pittsburgh; 10 grandchildren: Jennifer Wessner, Alyssa Minichiello (Anthony), Heather Vlassis (Brandon), Amy McCann (Ryan), Kristen Wessner, Michael Drauch, Taylor Wessner (Austin Williams), Madeleine Pla, Shelby Hewlett and Miranda Pla, 4 great-grandchildren with a 5 on the way. She is also survived by her brothers and sisters Joseph McDevitt (Rita) of Columbus, Ohio, Margaret Brahm and Joan McLaughlin of Allentown, and Robert McDevitt (Theresa) of Wayne, NJ, and many nieces and nephews. She was pre-deceased by her elder brother James McDevitt, Jr. Donations may be sent to Pancreatic Cancer Action Network (PanCan).org

Miriam Joan (McDevitt) Drauch, 89, passed away on August 13 at home surrounded by her three children. Born in Philadelphia on May 16, 1932, she was the daughter of the late James and Margaret (Heim) McDevitt. Miriam moved to Allentown as a high... View Obituary & Service Information

The family of Miriam J Drauch created this Life Tributes page to make it easy to share your memories.

Send flowers to the Drauch family.