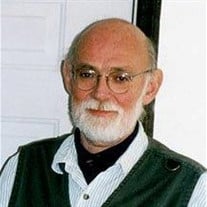 On Tuesday, Dec. 4, 2018, surrounded by loved ones, Trenton Orlando Schroyer passed on to loftier adventures and in to love everlasting. An American scholar, author, international activist and loving friend, father and grandfather, Trent's life was full of pondering, purpose, adversity and achievement. In all ways, Trent lived life on his own terms. Born on May 23, 1936, to Elizabeth and Edwin Schroyer, Trent grew up on his grandmother's farm in Wolfsville, Maryland. As Maryland's first Eagle Scout, his love of nature and his dedication to the earth steered both the way he lived and the underlying passion that guided his life's work. A voracious reader with an extraordinary intellect, Trent studied physics, geology and later philosophy at Antioch College and the University of Edinburgh. In 1959, he received a fellowship to study philosophy at Johns Hopkins University, and went on to receive a doctorate from the New School in New York City. In 1969, Trent was asked to join the Graduate Faculty of the New School where he taught social theory. Soon after, his first book, "The Critique of Domination," was nominated for a National Book Award. In 1973, Trent joined the faculty of Ramapo College, where he spent several decades promoting sustainability, teaching in the School of Environmental Studies as well as the School of Social Science and Human Services. As Chair of The Other Economic Summit (TOES), he was an international organizer and writer. Schroyer's publications span his lifetime and include articles, lectures, books and anthologies centered around neoliberal globalization and its alternatives, critical discourse of corporate ‘sustainable development’, and focus on authentic sustainability practices as well as documentation of the regenerations of intrinsic capacities of unique ecologies and cultures. His passion for the earth, continual pursuit of knowledge and truth, and love of learning were only rivaled by his love for his family, close friends and those who inspired him. He shared a lifelong, loving relationship with Emily B. Boardman, with whom he built a home in the woods, wildlife and mountains he loved so much and with whom he raised two beautiful children. Trent later married Tula Tsalis, with whom he shared a love of traveling, academia, and social justice. Together, they organized student trips to South India and the Aegean islands, educating students on regenerative alternatives to westernizing development. The final months of Trent's life were rich and fulfilling. After difficult years of dedicated care-taking and grieving Tula's passing, Trent had recently resurfaced as a traveling lecturer, rediscovered his work as a professor, uncovered a new-found energy for his writing and had found companionship yet again. Trent is survived by his daughter Amie and husband Ryan Saulnier and their children Luc, Beau and Sadie Rose; his son Kilin Boardman-Schroyer, wife Celine Fejeran and their children Gabriel and Aliyah; step-children Andrea Quast-Mortello and John Baugher and their daughters Ariana and Lena as well as John and Linda Quast and their daughters Alexandria, Jacqueline, Danielle and Lauren. He is also survived by several curious bear cubs and committed deer on Cascade Hill who will miss his attention very much. Trent’s work and dedication to the Earth and its creatures are legacies to be continued by all of us, his community, colleagues, children and grandchildren and the hundreds of students he had the honor to encourage. A memorial service will be held in his honor on April 13 at the Warwick Valley Conference Center. In lieu of flowers please send donations in Trent Schroyer’s name to the ACLU (https://action.aclu.org/give/donate-to-aclu-multistep) or Fireflies Institute ([email protected]) For more information on Trent Schroyer's life and work please see: https://en.m.wikipedia.org/wiki/Trent_Schroyer

The family of Trenton Orlando Schroyer created this Life Tributes page to make it easy to share your memories.

Send flowers to the Schroyer family.